The U.S. Energy Information Administration’s ( www.eia.gov ) new “Today in Energy” brief looks at how solar, natural gas, and wind will account for most of the increase in U.S. energy generation capacity this year.

“Electric generating facilities expect to add more than 26 gigawatts (GW) of utility-scale generating capacity to the power grid during 2016. Most of these additions come from three resources: solar (9.5 GW), natural gas (8.0 GW), and wind (6.8 GW), which together make up 93% of total additions. If actual additions ultimately reflect these plans, 2016 will be the first year in which utility-scale solar additions exceed additions from any other single energy source.”—EIA

These values reflect reported additions and retirements, not model projections. This year, as is the case in many years, expected energy generation capacity additions in December are much higher than in any other month. This typically happens because of the expiration of federal, state, or local tax credits on December 31, or because of how respondents complete the survey. Many projects expected to begin operation sometime in 2016 are conservatively estimated for a December completion date.

Solar. Planned utility-scale solar additions total 9.5 GW in 2016, the most of any single energy source. This level of additions is substantially higher than the 3.1 GW of solar added in 2015 and would be more than the total solar installations for the past three years combined (9.4 GW during 2013-15). The top five states where solar capacity is being added are California (3.9 GW), North Carolina (1.1 GW), Nevada (0.9 GW), Texas (0.7 GW), and Georgia (0.7 GW). These values reflect utility-scale solar energy generation capacity additions, and do not include any distributed generation (i.e., rooftop solar). In 2015, 8.4 GW of distributed solar photovoltaic capacity was added. The same federal tax credit incentives for distributed solar installations available in 2015 are available in 2016.

Natural gas. Most energy generation capacity additions over the past 20 years have been natural gas-fired units. About 8 GW is expected to be added this year, slightly above the 7.8 GW average annual additions over the previous five years. Four states plan to add more than 1 GW of natural gas-fired capacity this year: Pennsylvania (1.6 GW), Virginia (1.4 GW), Florida (1.3 GW), and Texas (1.1 GW).

Nuclear. Tennessee Valley Authority’s Watts Bar 2 nuclear facility in southeastern Tennessee, with a summer nameplate capacity of 1.1 GW, is expected to begin commercial operation in June 2016. When Watts Bar 2 comes online, it will be the first new nuclear reactor brought online in the United States in 20 years. The most recent reactor to come online was Watts Bar 1 in May 1996. 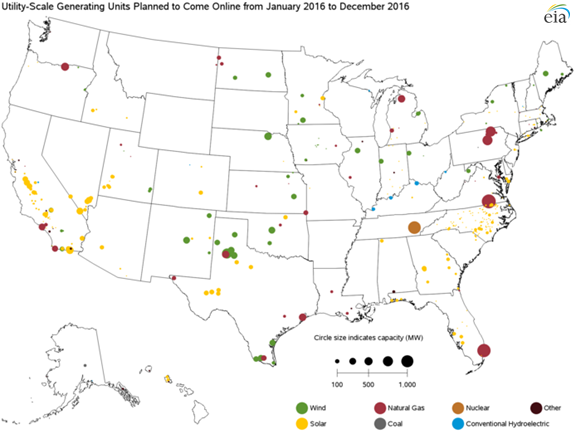